Want to bring your inner game to the next level? Sign up for our lead from light newsletter SIGN UP

Join Carley for her podcast, SHINE- Lead consciously at work and the world (which is the title of Carley’s upcoming book with Sounds True).  Every month, Carley interviews amazing emerging leaders, business leaders, researchers, spiritual teachers, and game changers who have developed a conscious inner game to support the new paradigm of leadership at work and the world.

Over the past 15 years, Carley has supported leaders and teams to create resilient, caring, and conscious cultures in business settings such as: LinkedIn, Pixar, Bank of the West, Genentech, Asana, and many others. Carley teaches on the concepts of conscious leadership at Stanford University and UC Berkeley Haas Business School. Carley invites her guests to share authentically about the tools, practices, challenges, and heartfelt motivations that support them to shine. These conversations are designed to give you tangible action steps, wisdom, and inspiration to ignite your call to lead and support business to be a force for good in the world.

Jeff Brown is the author of many books and founder of SoulShaping Institute. Brown wrote the viral blog “Apologies to the Divine Feminine” catapulting him to a greater degree of notoriety, particularly in the world of social media. Jeff released his first film—Karmageddon—an award-winning spiritual documentary that highlights his journey with spiritual teacher Bhagavan Das. Also featuring profound interviews with Be Here Now author Ram Dass, yogis Seane Corn and David Life, and chanters Wah, Deva Premal and Miten, Karmageddon is an unforgettably self-revealing and brutally honest film about spirituality, integrity, and emotional healing.… READ MORE...
FULL SHOW NOTES

Raman Frey, is first and foremost an amazing human and my dear friend. Raman is the founder of Good People Dinners, a Bay Area community focused on meaningful conversations that bring together professional chefs and thoughtful speakers on a variety of topics. Raman is an incredible speaker, moderator, interviewer, and author. His writing has appeared in many publications, including Harvard Business Review. Raman has written a book on how we might design and deploy new incentive systems to create a more just and thriving world. This is the topic of this Shine podcast interview.… READ MORE...
FULL SHOW NOTES

Regenerative leadership and organizations: the path to a sustainable economy and world with Laura Storm (Coming Soon)

Laura is an international thought leader and expert on sustainability leadership and has spent her entire career advising global leaders on sustainability and building impact- and purpose-driven organizations, and movements. She is co-founder of Regenerators with her partner Giles Hutchinson. Laura has supported the Copenhagen Climate Council, the World Business Summit on Climate Change, Project Green Light and Sustainia.… READ MORE...
FULL SHOW NOTES

Vince takes pride in creating an inclusive environment and was recognized as Intel Inclusive Leader of the Year in 2017. He declared that he would drive to 40% gender diversity by 2025 at Intel Costa Rica. Inclusive Leadership and his passion for developing others to achieve more than they believe possible is what motivates him. He is a strong believer that when you combine technical excellence with leading people in a positive way, you can do anything.
Vince serves as the VP/GM, AMR Manufacturing Operations at Intel.… READ MORE...
FULL SHOW NOTES
RECENT EPISODES 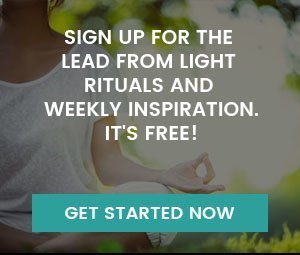 at WORK and in the WORLD?

Increase your focus, confidence and resilience with your FREE copy of Lead from Light

GET STARTED
Go to Top
Send this to a friend